Appearance of the Younger Brother

Now then, half a year has passed since that event. …In other words, since I regained the memory of my previous life, almost two years has gone by.

The profit of Azura Conglomerate is the same as always, excellent. Although competitors have started to appear, in just one short year, I wondered if our conglomerate has gotten so big that it is now considered as a brand.

The reformation of the fief is happening little by little. The bank has become more widespread, and the road maintenance will be done soon.

The High School division of the educational institution has started its operation, and I heard that a lot of students had gathered. …As for the Medical department, the local healers are also actively participating, while in the Accounting department, just as planned, the children of merchants came to learn double-entry bookkeeping and economic theory.

I heard that people have been enrolling to the Farming department little by little. After that, Primary School division was opened. Children from the institute are also attending, and when I went there to play the other day, they asked me to read some picture books.

By the way, the people who were arrested in that incident were sentenced to forced labor, so I used them without reservation. They were just arrested because taxes cannot afford to jail them.

As time progresses, a lot of various different things happened.

…That’s right, time had passed by. Nevertheless, for some reason, mother and grandfather are still here in the mansion. No, it’s all good and well, you know?

I mean, mother has really good sense, and she has given various advises and proposals to the development department of Azura Conglomerate, which really helps.

On the other hand, thanks to grandfather’s training, the proficiency of our guards has increased. Although it’s fine… It makes me think, ‘are the both of you doing all right?’

Besides, the both of them have their own associates to socialize with, and they also have their own individual lives, right? While thinking of such things, it wasn’t as though I can tell them to go home with those reasons, all things considered… Well, if the people involved are fine with this, then I’ll just leave it alone.

“Mother! Exactly what on earth are you doing?”

While I was having a pleasant tea time with mother in the garden, an intruder suddenly appeared. …It was my younger brother, Berne. He hasn’t changed one bit ever since the last time I saw him.

“…How boisterous. Please escort him out.”

Mother didn’t even take one look at Berne, she just treated him coldly. Ah, her tone of voice has changed… and cold sweat trickled down my back.

While the employees were urged by mother’s intensity, they were also lost on what they should do because the other party was the heir. Among them, only Tanya began to move to carry out mother’s order.

However, before she was able to approach him, he looked at our direction angrily and asked.

“Don’t dodge the question, please tell me the reason.”

“If you’re asking for the reason, I have already written it in the letter. Because I am currently in poor physical condition, I will be resting in the fief and will not be attending.”

“Hmph… You’re having a cup of tea as usual, so who exactly is in poor physical condition? In addition, it was an invitation from the royal family… did you want to plunge MY Ducal House into a predicament?” 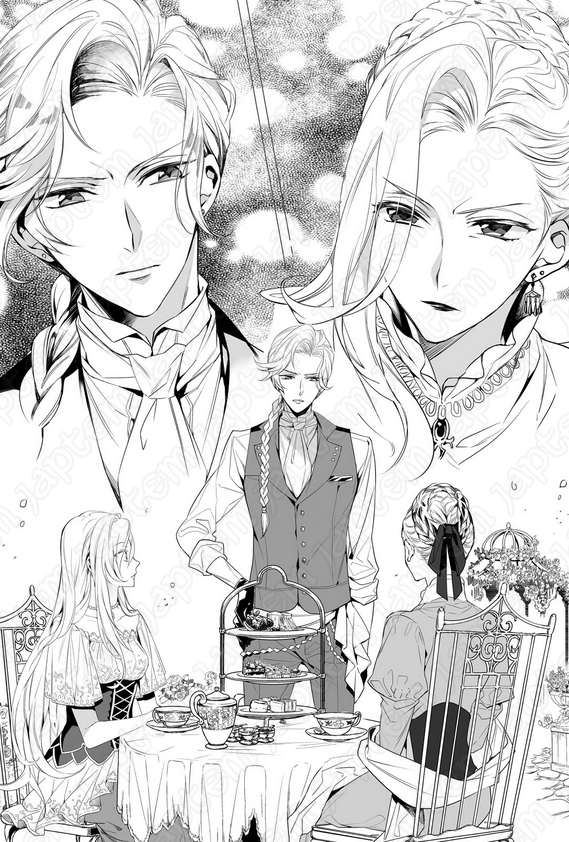 Surely, right now… Berne thinks that he has complete predominance over mother… and has a triumphant expression. But how regrettable. Mother is not someone who will stand for being talked to that way. My evidence appeared when mother put her cup down and gave Berne an icy glare.

“…You talk too much. YOUR Ducal House? What a thing to say for someone who has yet to inherit the title.”

It was a strong and intense punch. Nevertheless, it was a sound argument. Berne probably never expected her to say something like that… and in an instant, his expression broke.

“…As the person who will be succeeding it sooner or later, and my statement earlier was said in consideration of the Ducal House.”

“Silence. In consideration of the Ducal House? Hmmm… In that case, there must be a really good reason why you did not return home to during the long vacation to study how to properly govern the fief under my husband?

Surely the reason isn’t because you wanted to be together with the Second Prince and that Baron’s daughter or something like that that you have completely disregarded your responsibilities.”

“First things first, I have received permission from the Queen Dowager to be absent from that party. You, have you become so great to the extent that you can dispute the decision made by a royal?”

Un, this situation has completely fallen into the hands of mother thanks to her tactics. To begin with, even though it is a party sponsored by the royal family, absence is chargeless.

…However, it is done rather rarely. Moreover, the Queen Dowager has given mother her approval… So even if it’s the royal family, they cannot say this and that.

“In the first place, to invite the mother of the girl whom he had his engagement annulled, to an engagement party to get engaged to another girl, their motives are suspicious.

In addition, it was only a little over a year since the engagement was annulled. The Queen Dowager as well, she is grieving about it. Since that’s the case, my husband who is the Prime Minister might not want to go as well.

However… Because your father has an official position, he will likely attend. And thus, this will be enough to represent our Ducal House.”

Ah… So it was finally the engagement between the Baron’s daughter and Ed-sama. It has almost been two years since that time… Before, I was thinking that the two people who have always been lovey-dovey to have waited for two years sure had a lot of patience.

“Exactly what is it you want. You show your face here and then immediately started raging. …I doubt your dignity. After all, there’s a saying that those who hang around people with no dignity will be dyed the same color.”

Berne’s face rapidly turned red. Ah, he got angry~ …I wonder if it was because mother was referring to the Baron’s daughter, Yuri.

“Mother. Even if it mother, it’s not a good thing to say bad things no matter how much you think about it…?”

“Hmph… Right here and now, would you like to denounce your mother? Just like what you did to your older sister?”

Although Berne tried as best he could to counterattack, but it had no effect on mother. If he denounced mother, it will not be possible for him to remain part of the Second Prince’s entourage. In the first place, the Queen Dowager will not be silent about it.

“I am disappointed with you these days. Of course, my husband is also of the same opinion. If you do not clear up your act, we do not mind disinheriting you. And besides, with your older sister governing the fief impeccably well, we have nothing to worry about.”

For the first time in this conversation, she looked at Berne and smiled. Ah, but the smile she has now is scary.

“I’m glad for you. You can stay together with the Baron’s daughter whom you love forever. Ah, however… since you have no charm, after taking your position away from you, you’ll probably be thrown away.”

“…Such a thing, it’s impossible… In the first place, why did that older sister became the fief Lord’s proxy? She committed a rude act towards someone who is soon to become part of the royal family. Other than losing her social position, she should be exiled immediately.”

“…I don’t know about the future, but right now, she’s a Baron’s daughter. In the first place, It is outrageous for a daughter of just a Baron to bare her fangs towards a daughter of a Duke.

If it wasn’t for the Second Prince who is part of the royal family, and you, the black stain of our House, being at that place, our Ducal House would have immediately crushed the House of that Baron’s daughter.”

Un… Other than holding back because of the Second Prince, Berne was also taken into consideration. I guess that’s true. Although it’s unpleasant, when one fights, they are representing their individual Houses. When a person from your own House condemns another person in your House, it will be too embarrassing to retaliate.

“The fief Lord’s proxy has the same authority as the Lord of the fief. In other words, you, who is unrelated to the fief politics, even if you complain, it will not amount to anything.

In the first place, someone who discriminated against his own family does not benefit the Ducal House and is thus unnecessary.”

“I will not accept this…! Please let me meet with older sister.”

Even though he said he wants to meet with me… I’ve always been sitting right before his eyes. I thought that my presence has been disregarded since a while ago, it looks like I wasn’t wrong. Eh, has he… already forgotten how I look like?

“What will you do after meeting her? Ask her to pass the position of being the fief Lord’s proxy? …You do not have that authority. To begin with, you don’t have the qualification to call Iris your older sister.”

Mother exhaled a whiff and resumed drinking tea. It looks like she has cooled down a little. Let’s ask Tanya to serve more.

When I casually looked at Tanya, there was a color of doubt reflected in her eyes. She is probably wondering why my younger brother asked to meet me when I was right in front of him.

And the reason he came flying in here in a rage is because of the engagement party of the person whom I was engaged to… is probably what she was thinking.

When I see him face to face, I thought I would tell him off and beat him up… At least I thought that’s what I would do. However, now that he’s actually in front of me… I don’t feel anything.

If I were to put it in a single word: nonexistent. Right now, his existence is similar to a pebble by the roadside. At that time, Berne and I became strangers, and I have already erased his existence in my mind.

Ah, however, I have this bitter thought in my mind from time to time wishing that he would not want to return from that flower garden and succeed in governing the fief.