By the way, younger brother stayed for several days before leaving. He had given up on persuading mother.

With this, the Baron’s daughter is now officially engaged with Ed-sama.

As usual, the First Prince didn’t show himself in the Royal City.

And so, the Second Prince graduates this year.

Compared to the First Prince who doesn’t show himself, information about the flashy Second Prince reaches this place regularly.

In addition, the Second Prince’s faction is admirably made up of aristocrats who enjoy being above others… In other words, other than having good lineage, all they are good at is attending as much superfluous tea parties and balls as possible.

By the way, most of the Houses that are in the Second Prince’s faction are facing financial difficulties. They expend too much without thought, and they don’t participate in developing their own fief. This information was obtained from the Azura Conglomerate.

In other words, to say it frankly, other than their lineage, those Houses in that faction are in a delicate situation.

In comparison, the First Prince’s faction consist of a lot of aristocrats who concentrates in developing their fief, and new aristocrats who gained titles after making impressive achievements.

That said, it means that the Second Prince’s faction has similar characteristics with him, flashy and like to throw their weight around.

Father, I am worried that a hole will open in your stomach. Speaking of father, after the engagement party, mother stayed for a while before returning to the Royal City. On the other hand, grandfather is still the same as before, staying in our house.

As for me, there is no particular change and is still busy every day. 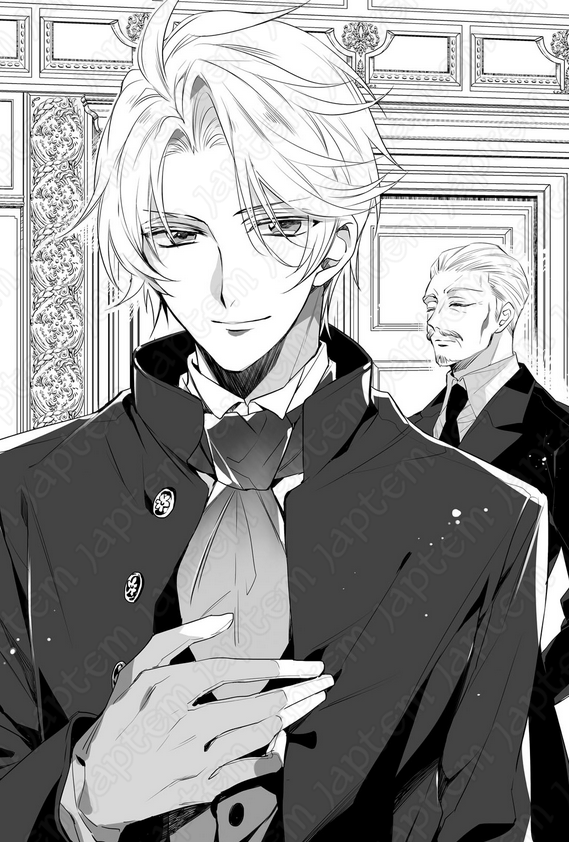 “As I’ve said before, Dean. Won’t you become mine?”

Those were the words I’ve asked for the Nth time, but Dean, without blinking an eye, smiled and responded.

“Although I’m thankful for your words…”

Likewise, this answer has also been said for the Nth time, rejection. Ahh, it’s so frustrating.

When one listens to this conversation, it would sound like a confession… No, it sounded more like a dangerous conversation of a madam trying to trick a young man.

In addition, Dean has stunning emerald green eyes, beautiful blonde hair, and a beautiful face. It looks like he also has a trained body, which increases his charm. With his beautiful face, it can only be seen as though he’s being wooed… Well, I guess I am trying to woo him.

“HAaaa… I understand. However, I will not give up. For the time being, please take care of me for one week.”

What do I mean by one week? It’s to help out with the fief’s politics as my assistant.

…It all started before mother returned to the Royal City. Utilizing the Commerce Guild’s temporary staffing services, where they send talented people to help out during busy times with short-term contracts.

Dean is the person whom we have contracted. At first, although it is a little rude of me to say this, but because I cannot keep tabs on every single member, I didn’t know of his existence.

However, details of his reputation and capabilities on the scene had reached me.

Since that is the case… I gave him something to take on individually, and he delivered admirably. Then, I decided to have him undertake a slightly heavier task… that situation happened repeatedly, and he finally became my assistant.

Although mother has never met Dean, she said, “If it’s him, I feel like I can leave it to him without any worries.” Since I had full confidence in mother’s insight and the person she picked, I selected him to become my assistant. Of course, his abilities were guaranteed.

…In any case, I feel at ease. What I had intended and the purpose, he was able to hit upon it on his own. It saves me a lot of time from having to explain it to him, and I can work on other things. When I consider his abilities, he alone can do the work of ten others.

Now then, let’s go back to the topic earlier. What I have said that sounded like a confession is actually me trying to scout him. …Although I want him to formally employ him to undertake the fief’s day to day affairs… but he would only accept short-term contracts.

It seems like he has to go back home to help out in his parents’ house. That’s why, he would stay here to work for one week, and then he would go back for two to three weeks.

Because he’s like that, I find it regrettable to part with him and his abilities, so I would scout him every time he comes.

Sometimes I get uncertain and think that I should suspect something, but since the fief’s government doesn’t really have much confidential information, there shouldn’t be any problems. …Mother’s words also played a big role.

“Yes, here’s the income and expenditure reports of the academies and next year’s budget application.”

“I made some modifications.”

“Thank you. A primary school has been founded in all regions… and I was thinking of opening up a middle school for vocational training.”

“It would be difficult to do so with the existing budget.”

“Well, that’s right. As I thought, we need to make a change to stabilize tax revenue…”

“That said, the Sales Tax is a little premature. The basis of taxation is Fairness, Simplicity, and Equality. We are currently at the stage where the primary schools are still newly founded, but the literacy rate will slowly increase. The people will start to understand. Large stores aside, it will still be difficult for small shops.”

“Although I said that, I think it’s a novel idea. After the literacy rate goes up a little more, and then, after a while, introduce the arithmetic and spread it little by little.”

“Un~ …I wonder if I should start to head off in that direction?”

Ruffling through the papers, I found the draft of the income taxes.

“To abolish poll tax, and shift to income taxes… I am quite uncertain about that. As I’ve reported earlier, the basis of taxation is Fair, Simple, and Equal. Also, the people have all been participating in paying poll taxes, and have all regarded it as acceptable.”

“Being too equal is also a problem. To impose taxes on a child who doesn’t have the ability to pay them. It can only be considered as shackles to those breadwinners.”

That’s right, I do think that poll taxes is the idea tax.

It’s easy, and it’s equal. But I think that it’s too equal, it is impossible to consider it as fair. In addition, for it to be imposed to those who do not have the abilities to pay them, it will become a heavy load for them.

“…Certainly, there’s also that way to view it.”

“Right now, the draft is about imposing taxes based on an individual’s earnings… But since it will be difficult to calculate the income taxes of farmers, so the plan was to have the public office calculate it based on their ‘Deemed Harvest’ and collect taxes from there.”

“Is it because of that that you’ve asked the Public Affairs to work on clarifying the boundaries of the lands?”

“That’s right. …Of course, it’s not only for that purpose.”

“I see. Since that will be the case, it will be easy to analyze the harvest of the crops depending on the climate year each.”

“About that, can the public office find enough staff to do those calculations?”

“I told the Financial department to let the students who are currently enrolled in the Finance course participate alternately. Not to mention the Finance department, I intend to employ the graduates for that sector. The people’s knowledge will improve sooner or later, so it would be ideal for them to learn about taxes.”

“…That is something that will probably take a long time.”

“Well, I wasn’t expecting the results to be immediate. That’s why I said sooner or later. In addition, we shouldn’t just consider the taxes for individuals, we also have to prepare the taxes concerning the companies and conglomerates.

“…What will you do if the conglomerates and companies rebel?”

“Don’t you think this will alleviate them from paying more taxes? Currently, they have to pay import and export taxes each time they enter and exit each city. With this, when they import and export to other places other than our fief or to a different country, they will pay fewer taxes in the future. …In that situation, distribution will also increase.”

“Certainly, it will be able to somewhat moderate their repulsion. Because each company and conglomerates currently have someone enrolled in the accounting course to learn double-entry bookkeeping, it will help when they calculate their accounts. …This way, it will not increase their burden to some extent.”

“That’s how it is. The conversation we had earlier, let’s talk it over once more with the people from the Finance department.”

Due to a hectic work schedule, the next release will be on April 18th. The deadline to submit income taxes is near, so I have to battle with those for the coming days.

It’s ironic that this chapter touches upon income taxes…

PS: I have received my copy of Volume 2. And according to the illustrations, Iris’ mother’s name is “Mellice” not Marilyn… What do you guys think? Should I change it to Mellice or just leave it as is?