Now then, I, Iris, after receiving instructions from father, have moved to the Armelia territory. Today is the first day. The morning sun is dazzling, illuminating the territory.

As for what I’m doing so early in the morning, I’m practicing yoga. The first thing I did in the morning after waking up is to exercise, and more importantly, it’s good for the health. …Well, not quite. My body is a little chubby, you see. Because of my status of being a daughter of a Duke, I tend to eat luxurious and high-calorie meals as much as I desired, so it’s natural for me to gain weight. And because of that, I decided on going on a diet and work hard in the mornings.

I wonder why Tanya is so surprised? Ah, of course, Tanya also came to Armelia territory with me. I thought it was fine since it was not the “confinement route.”

“Good morning, but that’s not it. Young mistress, what on earth are you doing with that kind of appearance.”

“This kind of appearance, you say…”

I looked at my own appearance. …Linen tunic and pants which I procured with the help of a maid. Don’t you think it’s the perfect clothing to wear while exercising?

“For the goodness of my health, I intend to exercise like this every morning. I chose clothes that are easy to move in, is it no good?”

“Yes. I read in a book that it’s not good for one’s health if one doesn’t move their body. Because I intend to do this every morning, please do not be so surprised.”

“I understand… Please excuse my impoliteness.”

“It’s fine… But because I perspired, could you please have a bath ready?”

After I got into the bath Tanya had prepared, I went and had breakfast. …Because I exercised, I ate a lot for breakfast. Of course, I made sure it was well balanced.

“…After this, I would like to speak to Sebastian. Could you please make an appointment?”

The excellent Tanya immediately made an appointment with Sebastian, and the talk with him will take place before noon. Sebastian is a Steward and Butler of our House. Even when I say “butler,” he has been left to administer our territory substantially. In other words, a Super Butler.

When Sebastian entered the room, he somehow had the same smell as Rimé… In other words, he was dressed stylishly in a swallowtail coat. Even though he was moving briskly, he didn’t give the impression of someone in a hurry. Instead, his movements looked really beautiful… In addition to a head full of gray hair, his appearance is the definition of a dazzling butler.

“…You appear to be quite busy, I apologize for calling you in spite of your busy schedule.”

“Nay. By all rights, it should have been me who should have given you my greetings, I apologize.”

“Now then, without delay. Could you please gather and present to me the reports of the territory’s income and expenditures for the past three years?”

“I respectfully obey. However, what will you be doing with it?”

“I will be reading all of it, of course. I have, after all, accepted the “Feudal Lord Representative” position given by the Duke. However, although I’m ashamed to say this, I currently have no information on how the territory is being managed or the present situation. Therefore, can you please give me one month?”

“Yes. Because it is necessary for me to read all the reports, and to also inspect the land.”

“Certainly. However, if you wish to inspect the land, it will take approximately one week in order to make necessary preparations.”

“This time, in order to grasp the present condition, I intend to do the inspection incognito. Therefore, I’ll only need the minimum number of people to accompany me. Because I can vouch for those members, I will not need to trouble Sebastian.”

“I asked a presumptuous question, I apologize.”

“Not at all. Although I will be managing the territory from now on, I will nevertheless give you an important position. So please feel free to give advises.”

After Sebastian left, I called for Tanya to come.

“Tanya. Could you please call Ryle and Dida, and Rehme as well?” 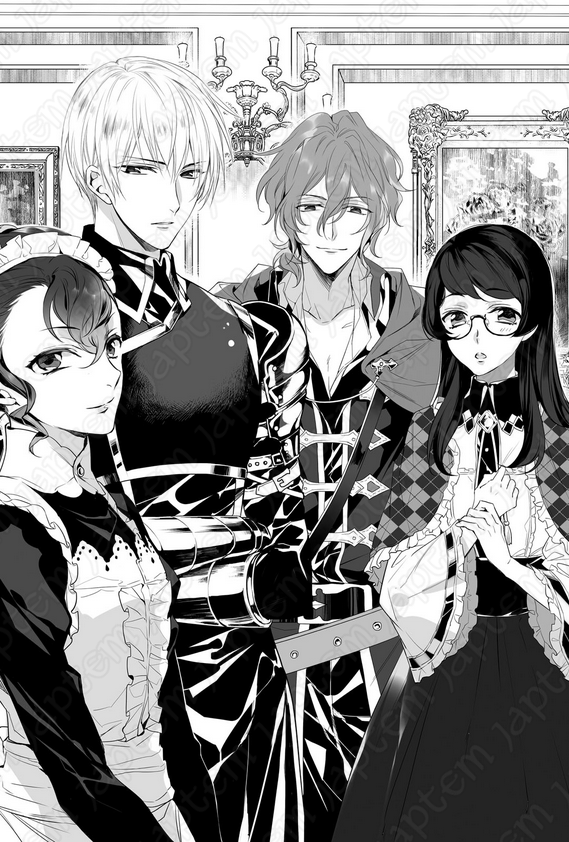 After several minutes, Tanya entered the room with three other people who were about the same age as I… In other words, they were also people whom I have picked up.

Ryle has beautiful blonde hair, looking like any other young nobleman. And although he has a physique inferior to the Kingdom’s Knights, he would not lose to them when it comes to a fight. Besides, he is more or less my bodyguard.

Dida, just like Ryle, serves as my bodyguard. Although he is a person who gets happy easily when praised or flattered and has an easy-going nature, his abilities are guaranteed.

Rehme is a girl who wears glasses and likes reading books. She currently serves as the librarian at our House. Speaking of the Duke’s library, it has a collection of precious books. When comparing to my previous world, the collection of books are in the scale of junior high school level and above. Thus, she finds her role very important.

“It’s been a long time since we’ve met, everyone.”

Because the three people weren’t able to come with me to the Royal City to attend the academy, they stayed in the territory to work.

Although I told them that they were free to do as they wish… and that it was agreeable for them to leave the territory, I am glad they stayed and yet apologetic at the same.

“It’s been a long time, our princess.”

The one who answered first was Dida. He answered it in his usual easy-going manner while smiling.

“Dida. You’re talking to Iris-sama in that tone again…”

“It’s fine, Ryle. Everyone is like family to me. When there’s no one else around, I’d be delighted if you guys spoke to me the same way as the old days.”

Ryle approved while blowing out a large sigh.

“As everyone already know, my engagement with Edward-sama has been annulled, and I have returned to this territory.”

“I absolutely cannot accept it. Why was Iris-sama’s engagement not only annulled, but must be confined to the house?”

Rehme was similar to Tanya. She was also crying in vexation. Although there’s a gap between her personality and appearance, she always spoke in a leisurely manner.

“That’s right. Indeed, he is a young master with a poor eyesight.”

“Thank you. However, this matter has already been settled. Besides, I am ecstatic to be able to live together with everyone in this territory once again. …Now then, about the real issue at hand. As everyone know, I have been appointed as this territory’s Feudal Lord Representative. And so, the first thing I want to do is inspect various places… Is everyone willing to accompany me?”

“Princess’ escort, huh~ It has a nice ring to it.”

While two people showed their motivation, Rehme had a difficult expression on her face.

“The two of them escorts, so I understand. But what purpose do I have as a companion?”

“To put it simply, it’s because I want your knowledge?”

“If I’m not mistaken, you’ve extensively read every book available in the Duke’s library? There were also books about the local history and geography. I want the knowledge you’ve acquired from reading those books. Besides, it differs greatly when there’s prior knowledge while investigating various places.”

Our House really has an amazing collection of books. Apart from being a noble house, those books have been collected by generations of generations of Prime Ministers. Every single large room in this mansion has already been filled with books.

As for genre, there’s also a wide range of variety. Those books were, of course, collected based on the varying hobbies of different generations, such as Politics, Geography, Law, and various others. And since Rehme had already read through all of those books, I trust that she has immense knowledge.

“…If that’s the case, I understand. I will work hard to fulfill my duty.”

I would like to thank Lir who has informed me of this misprint.

If you look at illustration (2 of 10), you will notice that Ryle and Dida’s name has been switched. Ryle is the handsome blonde guy with blue eyes while Dida is the easy-going guy with a sexy smile 😉 The misprint has been fixed by Haikai~

Because this chapter is a prelude to something, I will try to finish translating the next chapter later today. However, I make no promises because it’s Easter Sunday and little cousins will be coming over to hunt for easter chocolate eggs. But for now, I shall go to sleep dreaming of handsome guys, hahaha~