Within two days, I finished reading all the documents right in time before the inspection. Not just the big towns, but even those rustic villages.

I feel apologetic to Ryle and Dida, but our journey went smoothly without encountering thieves, so our inspection proceeded in an orderly manner. From time to time, I would ask Rehme about the villages to get a better grasp on the circumstances.

Like that, almost one month had gone by… and it was finally time for my appointment with Moneda. Truth be told, to me, my meeting with him is the first obstacle. 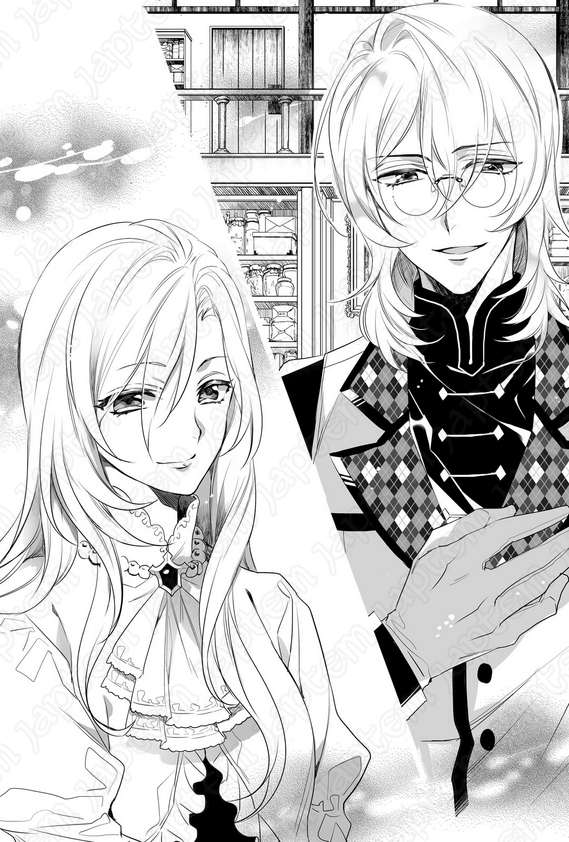 “It’s been a long time since we’ve met, Iris-sama.”

The person who entered the room was a refreshing looking young man wearing glasses… That said, whenever I see his smiling expression, it can’t be helped that I can only find him suspicious.

“It’s been a long time, Moneda. Ah, please do not stand on ceremony. Because I’m traveling incognito today.”

“No, this is just my way of doing things.”

“Is that so. You’ve certainly been like this since way back.”

Suddenly getting straight to business, huh. There was no place to have that heartwarming talk about old times… But then again, Moneda has always been like this since the olden days.

“Well, Moneda. Even though it’s been a long time since we last met. And so, how has Moneda been doing lately?”

“My current condition? Well, to put it simply, fairly well.”

“I thought as much. As expected of the Commerce Guild’s Vice Chief of Accounts. Since that’s the case, you are, of course, aware of my movements?”

A bitter smile floated across Moneda’s face. It is a characteristic of a Merchant to gather information as quickly as possible. It will be a big problem to do business without understanding the current happenings. In other words, they naturally know the movements of aristocrats and where they spend their money.

“As you know, because of what had recently occurred, I have returned to the territory. By the way, Moneda. How has the guild been doing these days?”

“That is also going well.”

“Hmm, is that so? Even though the commerce in the Royal City have decreased?”

With a snap, the peaceful expression he had until now froze.

“Well, that’s no good. If what you’re thinking reflects too much on your face, your will immediately be seen through by your business partner.”

Hohoho, while laughing like a typical young lady, I thought the peaceful atmosphere would return, but Moneda’s expression remained stiff.

“Moneda, I’m sorry about that. I was only asking questions to trick you. However, as I’ve said earlier, the commerce conducted in the Royal City have indeed decreased.”

As for why, it’s probably because the political situation in the Royal City is unstable. That said, it’s not as if it has reached a critical point. This is something I came to understand after consulting the account books day after day.

Incidentally, I was really just asking him questions to trick him without any other reason whatsoever. Now that the political situation has become more and more difficult to predict, it is inevitable to be extra cautious compared to before… And I’m not saying it in just a merchant’s point of view.

“…I’ve been done in. For reference, how did you come to that conclusion?”

“If you look at the present political situation, you’ll naturally come to understand it. That said, Moneda. I didn’t come all the way here just to be cruel to you.”

The flow of the conversation has been restored. But I felt like it differs from the one earlier. Although we started on equal grounds… I was the first to break out and grasp the advantage of the conversation. This time, however, the other side seized the initiative. But perhaps he might still listen to this little request of mine.

“Moneda. I was wondering if you’d like to be in charge of a larger amount of money.”

“A larger amount of money, you say? Are you trying to employ me for the House of the Duke?”

“Yes. However, I do not want to you serve the Ducal House, but rather, the Duke’s territory.”

“…That, exactly what to do you mean by that?”

“From now onwards, the Duke’s territory will be undergoing a reform. For one thing, the administration of our House will be divided between different people. In other words, I would like to ask you to manage the budget of this territory.”

“Why, did you choose me? I’m sure that the Duke’s House will are not lacking talented people.”

“It’s because you’re already familiar with the field. In addition, this reform will be carried out medium to long term. Because we will be pushing towards fundamental reform… knowledge is unnecessary right now. Although the basics are necessary to some extent… but for someone who is the current Vice Chief of Accounts, I’m sure you’ll do just fine. Above all, it’s because I know I can trust you. Trust, meaning that you will not be moved even when you’re bribed with money.”

“Hahaha, it has surprisingly turned into an impressive conversation. If what you say is true, I’m looking forward to what lies in the future territory of the Duke. …However, excuse me for being impolite, but do you have the authority to appoint people?”

Ah, he doesn’t believe me. The majority of the reason is because father is not in the proximity… So perhaps he’s thinking that I’m fabricating information for my own exploit?

And therefore, I will reveal my last card here.

“Of course. Because at this time, I have accepted the position of being the representative of the Feudal Lord.”

At the same time, I showed him the Letter of Appointment. This was something father had handed to me before I left for the territory.

…Truthfully, I have yet to announce it publicly that I was appointed as the representative of the Feudal Lord. And I still have no intention of announcing it after this. Since it has a great effect when it comes to critical moments. …Such as now.

I thought that he probably would have never imagined I would be appointed and the representative of the Feudal Lord, and indeed, when I looked at Moneda’s face, he had a surprised expression.

Moreover, as the Feudal Lord’s proxy, father has placed all responsibilities of governing the territory to me. That authority is remarkable and is almost on an equal footing as the Feudal Lord himself. In other words, it was as if father is declaring that he is unstatisfied with young brother becoming his successor. But I am myself, and I will carry out my duties confidently from start to finish. Because it was also written in the letter, it can’t be helped if people were surprised. …Father as well, I wonder what he’s thinking about.

On the other hand, because it was useful, I am very grateful for it.

Second strike. Again, this chapter wasn’t what I expected it to be… I think this novel doesn’t want me to sleep! It wants me to keep translating.