Assistance of the Queen Dowager

Right now, I am in the middle of a mayhem.

…It is currently the party to commemorate the founding of the Kingdom. I thought it was strange for me to be invited, and when I arrived at the venue, I resolved myself and entered the place.

However, when I entered, rather than receiving cold gazes from the people, they looked at me with curiosity and interest. At this time, I thought, “Huh? It is different from what I had been expecting…”

And when I received a summon from the Queen Dowager, I didn’t think that she would say kind words and give me her support. Huh? Could it be that the person who invited me was the Queen Dowager… that’s what I believed.

Since my mission for today has ended, I heaved a sigh and calmly walked to a corner.

However, I didn’t think that Yuri-sama would appear right in front of me. …In addition, standing next to her was the grumpy looking Ed-sama, and Van-sama who was looking at me curiously. 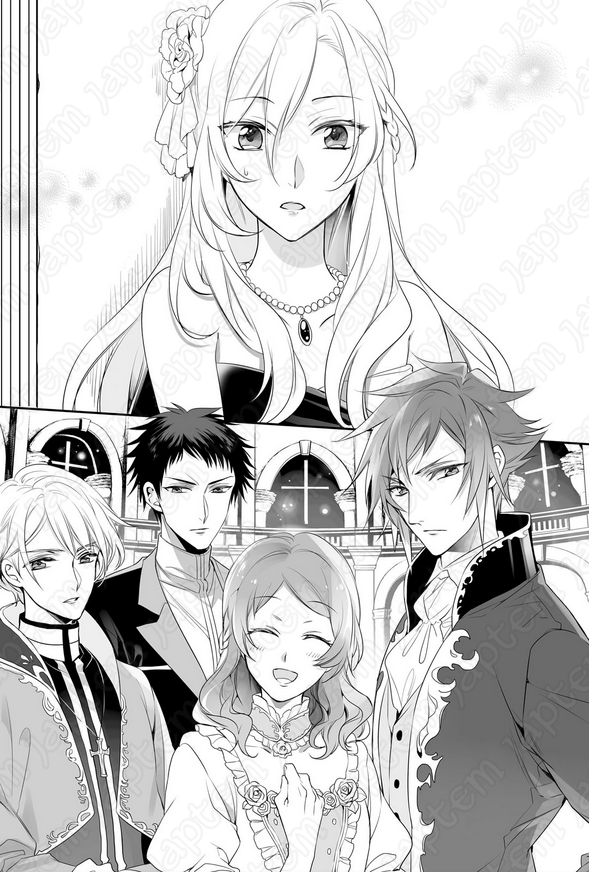 For the time being, I replied with a smile. …It doesn’t look stiff, does it?

“Iris-sama, it’s been a long time since you have not attended the academy~ I’m glad to see that you’re looking energetic~”

Huh, sarcasm? Was that sarcasm? Or is she simply saying that because she’s worried about me? Since the opponent is Yuri-sama, I hesitate to make any judgment…

“It is a good thing that Yuri-sama is also looking well.”

For the time being, I made a harmless remark.

Van-sama who was standing on the side made a comment.

“Didn’t I tell you so? I’m really good at distinguishing a person’s face. In addition, she’s together with Berne, so I thought she’s definitely Iris-sama.”

Yuri-sama said proudly… even though she was at that place when it all happened. Together with Berne, you were there driving me out with all your might!

Even so, you’ve changed too much. I didn’t notice at all.”

“Fufufu… Thank you very much, Edward-sama.”

….Yes, yes. As usual, you guys are surrounded with “kyakya ufufufu” pink atmosphere. To actually act that way in front of your previous fiancee, you really lack consideration.

On the other hand, I’ve already given up a lot of things to Yuri-sama… Besides, I wonder if Edward-sama has always been this happy? While I was wondering that, a doubt immediately arose within me after remembering the last words I said at the academy.

“…By the way, why is Iris-sama making an appearance here today~?”

I didn’t expect a sudden punch from Yuri-sama, and within a moment, the smile on my face disappeared.

“There’s no need for you to ask her why she’s asking you that question. Because you do not have any position to make an appearance at this place.”

Interrupting what Yuri-sama was saying, Edward-sama said while looking at me with hatred. Even if you don’t glare at me that much, it’s not as though I would eat her.

“It’s because Yuri is gentle. She’s giving you a piece of advice to remind you of your position.”

Or rather, listen to the other person’s story first! In addition, why are you being so boastful?

On the other hand, Yuri-sama doesn’t seem to understand what Ed-sama said and a question mark appeared on top of her head.

“…The reason I am in this place is because I received an invitation from the Queen Dowager. With or without any position, it is my duty, as a subject, to play my part.”

Ed-sama looked really surprised and his eyes widened. Were you not paying any attention when I went to greet the Queen Dowager a little while ago?

“No, that’s impossible… To someone as inhumane as you, there’s no way grandmother will send you an invitation. If you want to tell a lie, make it a little more believable.”

Although you are not convinced… those words are not something you should say to someone who you were once engaged with… When I was about to say something, Yuri-sama said something before me.

“…Umm~ What have you two people been talking about? I don’t really understand it~…”

With Yuri-sama’s words, his anger immediately lessened. You don’t understand it well? It was you who brought up this topic in the first place.

I wasn’t asked to do it or anything, after all, I am the President of Azura Conglomerate. As I thought, they didn’t know that I am the president of that conglomerate… Then, I remembered the chaos that occurred when I was talking to Sei and was told that these two people wanted to apply to become members.

“No… I wasn’t asked to advertise it or anything… but it is the truth that fabric used for this dress will be introduced as a new commodity.”

“Oh, as I thought~! It’s really beautiful. I would also want to have a dress tailored in this fabric. Where can I buy it?”

“Because we have yet to gather a lot of materials, it is currently not up for sale. But we’ll have enough materials soon enough, and a product line will be launched soon after.”

“Oh, is that so~ Because it looks really wonderful, I want one by all means… That’s what I was thinking. Is there anything you can do?”

“Although I am glad about your praise… however, we really do need more time, so pardon us.”

After all, it is being exported from another country, so the price is quite high. I thought that it can’t be helped since it’s silk, but thinking about the costs such as transportation, there’s a deficit.

Because of that, it doesn’t look like the conglomerate will be able to market it on a large scale… Even if we were to sell it at a high price, there’s not enough fabric. This time, I only made this dress because it was necessary.

“Th-that’s right. Yuri who will soon become a member of the royal family wishes it. It will be an honor for the conglomerate, and it’s their duty to immediately fulfill it.”

Ed-sama said with his face bright red. Fortunately, most people didn’t seem to hear our conversation because they were involved in conversations of their own, and also thanks to the music orchestral playing… Nevertheless, the people who were just nearby heard everything. Ah, how troublesome.

Mother suddenly appeared behind me.

“Ah, Duchess of Armelia. It’s been a long time~”

Splendidly ignoring Yuri-sama’s greeting, she walked towards me.

“Eh… I’m doing fine, mother. To cause such a racket, I’m really sorry to worry you.”

With the same tone as earlier, Ed-sama called out to my mother. Ah, a wrinkle suddenly appeared in the middle of mother’s forehead.

“Oh, Your Highness. Why are you speaking in such a loud voice in the middle of a party?”

“Under this circumstances… Why did you disregard Yuri! This is a blasphemy against the royal family.”

“Well, Your Highness. Surely you jest. …I’m certain you haven’t forgotten the manners of the court, have you?”

Mother unfolded her fan and covered her mouth with it. On the other side of her fan, I’m sure she’s blowing a big sigh.

“For a person who has a lower social position to carefreely address a person of higher social standing, the people in the surrounding will question the fineness of that person. If Yuri-sama is to become your princess… No, because of this reason, she should be well informed of such manners.”

“However, Yuri is the person who is engaged to me.”

“Yes, that she is. Although she’s someone you are engaged to, it doesn’t mean you have been formally married… In other words, she is not part of your House. Until then, her position will stay the same. …Before you get married, no one knows what will happen until then.”

Mother suddenly glanced towards me. Yes, that’s right. It is the truth that I had my engagement annulled.

“I don’t think social status is related. When someone greets you, you should return the greeting. Isn’t this the most natural thing to do~?”

Mother and I… No, everyone in the surroundings was dumbfounded. No, Ed-sama and Van-sama were not stunned at all.

A natural thing… to do. To say such things in a world of aristocrats where manners and formalities are essential is a serious offense. With the King on the top, the rest of the aristocrats are under him in a shape of a pyramid.

In Japan, it is proprietary to greet people and return the greeting of someone else. However, there are various ways and manners to greet and return a greeting, and that identically exists in this world.

“Yuri-sama. As someone who might become a member of the royal family, you need to learn how to conduct yourself.”

“It is as Mellice says.”

I thought that a new person is making an appearance, I didn’t think that it would be the Queen Dowager.

“Queen Dowager, is it fine for you to leave your seat and come here?”

While Ed-sama was surprised that she made an appearance, mother, on the other hand, inquired nonchalantly.

“It’s fine. The greetings have pretty much ended. That said, Iris. Let’s go over there, and please let me hear the story of what you have been up to recently. Mellice, will you be coming as well?”

“Is that so. The Duke of Armelia and the Marquis of Anderson are already there waiting for you. Please be my conversational partner.”

“Since you’ll be the only one left here, Berne, come with us to where the Duke of Armelia is.”

When we were about to take our leave, Ed-sama once again called out.

“What is it? You’re being too rowdy. …In this party, there are also people from other countries in attendance, so what’s with your awful state. You people, retire and cool your heads. Because with your appearance, the fineness of our Kingdom will be questioned.” 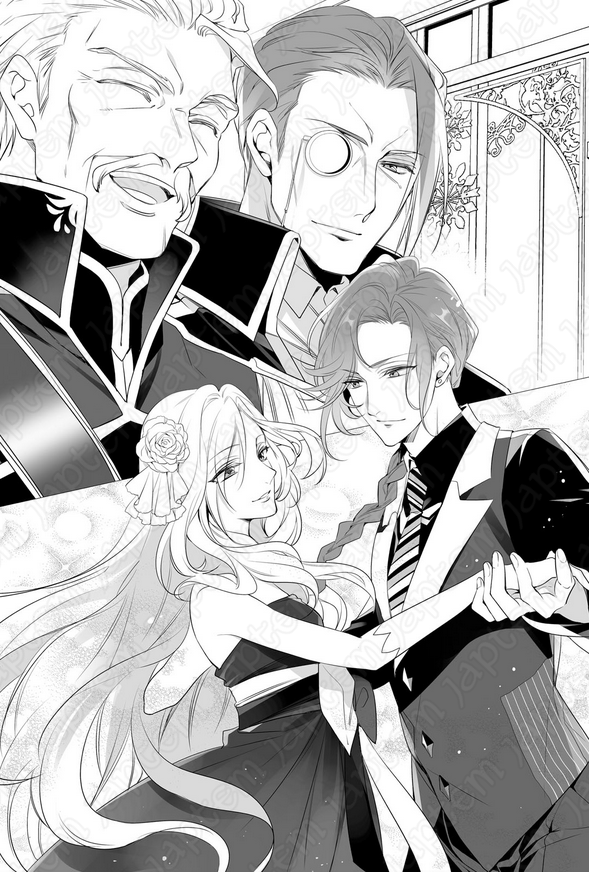 However, the Queen Dowager treated him coldly, and walked away, leading the four of us. The passing attendees looked at the expression on the faces of Ed-sama and the others… However, Ed-sama and Yuri-sama stood there with a blank surprise.

After that, the Queen Dowager returned to the seat reserved for the royal family. The people around her were people with high social status and distinguished guests from other countries, such as grandfather who is considered this Kingdom’s strongest military general, and important key figures involved in the Royal Court, and this impressive gathering of eminent and powerful members were smiling and laughing.

I wonder if it’s good that I came… that’s what I was thinking. Because I didn’t want to be at that place, I quietly stayed beside the Queen Dowager and conversed with her.

Popcorns are yummy, you guys should get some.

All hail Mellice! All hail the Queen Dowager!