Strolling around the Royal City

Now then, today is the day I take a stroll around the Royal City. I received a message from Mimosa saying she will be able to come, so I’ve been looking forward to it.

While I was practicing yoga at my usual spot, I heard Tanya’s voice coming from behind. Oh, my, it’s already that time. And so, I hurriedly took a shower and started preparing. Because I will be going to town today, I changed to my usual “Alice” clothing.

“Then, please have her wait in the next room. I will be there soon.”

When I finished preparing, I headed to the room next to mine. Although the next room is also part of my room, if the place I was dressing up in a little while ago is a private space, then the room next to that one has a drawing room kind of feeling.

“Good morning, Mimosa. I’m sorry to have asked you to come so early in the morning.”

Because Mimosa will also be going to town incognito today, what she’s wearing makes her more docile than usual. I guess one could describe her current appearance as a daughter of a merchant.

“And also, when I’m wearing this kind of outfit, I’m Alice.”

“An alias, it’s an alias. It’s not like I can announce my name to the public… So the first thing one would need to do is change one’s appearance, right? When you give yourself an alias, it gives an extremely different feeling.”

How should I say this, it’s gives a feeling of being an actress. When someone calls me with that name… I would make me get more into the role or something like that.

“I see… Since that’s the case, then my name will be Misha.”

“I understand. Well then, Misha. Shall we be off now… Or rather, I’ll make some introductions first. This is Tanya, I guess you already know her, and these two, Ryle and Dida, will serve as our guards today.”

The two people who were waiting behind, when I introduced them, they slightly bowed their heads. Although it was normal for Ryle to do so, but Dida is usually easy-going, so I felt quite uneasy.

“Nice to meet me… However, I’ve heard your names before, so it doesn’t feel like this is my first time meeting you. Please take care of me today. On the other hand, these two are my guards, Harry, and Dan.”

Harry and Dan who were standing beside Mimosa bowed respectively.

I also greeted the two. Harry and Dan has an “I am a guard!” atmosphere around them and felt somewhat stern. For now, since they are wearing plain clothes, I guess it isn’t so bad.

“Well then, since we don’t have much time, let us be off.”

First things first, we headed to the cafe in the Royal City. In here, one can eat chocolate cakes and various other desserts. I wonder how the sales of herbal tea are doing.

When I took a peep, it looks like it’s flourishing. The people who were queuing up for it formed a long time. Because we kept the price as low as possible, not only do the aristocrats buy them but also regular people in town.

“…Excuse me for being rude, Alice-sama. Wouldn’t be acceptable for you to use your name here?”

Tanya quietly made a proposal. Everyone is probably thinking the same thing, and question marks lit up above their heads.

“About that, don’t you think there will be no point if they knew I was here? What kind of service they provide, the quality of the products they bring out, and how they treat the people who visit the store; one will not experience these things if one doesn’t come as a guest. I’ve also included how long we need to line up in today’s schedule.”

“I was being too forward, please excuse me.”

“Misha. Because it’ll be like that, are you fine with walking and waiting a lot today?”

“Yes. When one walks a lot, it’s just nice that your stomach will feel more empty.”

After that, we waited for a long time before we were able to enter the store. …I wonder if I should expand this shop. Let’s think about that after looking at the appearance of the shop.

The shop is divided into two section, one of the space is for take-out. And the other space has been converted to a coffee shop.

Hmmm… I wonder if it’s about time to construct an individual shop for take-outs. Because it takes up a lot of space, and their sales are about the same as the confectionery shop.

That said, ‘let’s buy some to take home after we finish eating’ …there are also people who have those ideas. Should we keep the store divided but move them to a bigger shop? Or should we establish a branch shop? Hmmm, I’m uncertain.

“Hello, welcome to our shop. For how many people?”

“I’m really sorry. If it is acceptable for your group to be divided into two, I will be able to guide you to your seats at once…”

And because of that, we were seated separately. Because the other seat is relatively near, we decided to split it this way: Mimosa, Ryle, Tanya, and I in one table, and Harry, Dida, and Dan in another table.

In the beginning, I wanted Tanya to sit in the other table to keep the balance, but she expressed her disapproval. She said, to actually sit in a different table from mine…

And so, I asked if it would be fine for Mimosa and Harry to switch places. So what if they were her guards? Mimosa said that as long and either Ryle or Dida was here, she would be reassured. …For some reason, it seems she really trusted our two guards.

I ordered a cake set while Mimosa ordered the assorted fruits set with chocolate sauce. After we finished ordering, while waiting for our order to arrive, Mimosa and I started a light chatter.

The system of this cafe: the waiter will come to take the order and write it on a piece of paper, and then pass the order to the kitchen. The table number will be written on that piece of paper and is then passed to the counter that does the accounting.

When all the orders have been delivered, they will use the white part, but if another order is made, they will turn it again. Of course, when one makes another order, it will be added to the paper that has been passed onto the accounting counter before the order is delivered. …That’s the kind of system the cafe uses.

Because it might get difficult to calculate the amount when the time comes, an abacus was introduced. When I was still living in Japan… I’m really glad I learned how to use an abacus when I was in primary school.

The employees were puzzled by it at first, but they have gotten used to it by now. It was well received and their mental calculation has quickened. Not just in the coffee shop, but I wonder if it should be introduced in the primary school division of the fief… I shall put this under consideration.

While I was thinking those kinds of things and chatting, before I knew it, our order had arrived.

Mimosa looked delighted just by looking at it and immediately started eating. As for me, because Merida will always let me try her prototype or when she comes up with new products without fail, it doesn’t feel new to me. That said, eating it here in the shop and eating it in the house gives a whole different feeling. 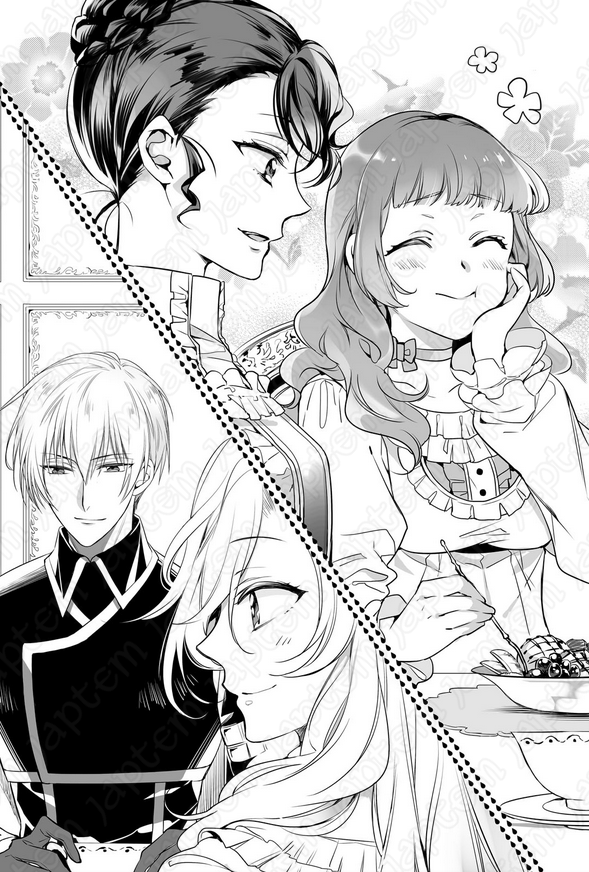 Mimosa said so while looking very satisfied. Somehow, I feel happy as though I was the one eating it.

Although they were busy and there were many customers waiting, their service wasn’t sloppy. I am genuinely happy that all the employees are working hard.

“By the way, why did you decide to start with the coffee shop?”

Mimosa suddenly asked. Before I knew it, the plate in front of her had been wiped clean.

“I didn’t have any particular reason why I chose to come here first. It’s just that they have really good raw ingredients here… that’s all.”

“Nevertheless, it has become this popular, I’m surprised.”

“As for me, I feel blessed just by being here.”

It might be natural for Tanya and the others to feel that way after growing up in that kind of environment. …It really does feel like a blessing.

After we finished eating and talking, we settled our accounts and left the store.

“Next, we’ll be heading to look at the beauty products. Let’s head there slowly while exploring the Royal City.”

Because there’s quite a distance between the coffee shop and the shop that sells the beauty products, we have to walk for a while. On the way, I didn’t forget to roughly look at the shops at the Royal City and prices of their items.

“Just now, I thought I saw Miss Yuri or something…”

Because the person disappeared into the crowd, I didn’t get a good look. In addition, because she always stood out well with her entourage, it wasn’t that hard to recognize… but earlier, it looked like she didn’t have two or even one of her followers were with her.

“Are you sure you’re not mistaken? There’s no way she would come here alone.”

I wonder if it’s because of what Mimosa said about her the other day, as well as my conversation with Tanya. It seems like I cannot get her existence out of my head.

I pulled myself together and headed to the next shop.

Iris thought she saw Yuri. Is she the real one? And what was she doing? Hohoho…

PS: I had to run out and buy myself a strawberry cheesecake after I finished translating this chapter…