The outcome of the match

Note: This is still written in Dorsen’s perspective.

I made a move as soon as I heard the referee’s signal, and I swung my sword with all my might at the man named Ryle. When I looked over at the person from the military who was originally my opponent, I saw him also pointing his sword at the man named Dida. In an instant, the both of us came to a consensus that we cannot cooperate with each other and should treat it as a one on one match.

As for Ryle, he took the blunt force attack of my sword. Clang, the sound of swords striking each other echoed in the area. As time went by, even when I pushed my strength to the utmost, he still didn’t budge an inch. I started to feel irritated when I saw the unchanged nonchalant air about him and a calm expression.

…If this continues, I will not be able to land an attack. While feeling like that, I momentarily drew back before continuing my attack. Just when I thought my sword was going to be sent flying, I was engulfed in a torrent of attacks. With one heavy blow after another, all I could do was to concentrate on protecting myself.

Nevertheless, even in that situation, I tried to find a gap to breach through, but I couldn’t find any. Even though I have been constantly attacked, I couldn’t have a chance to counter him. …It has been a long time since I have been one-sided attacked. Up until now, I have grown up in an environment where I could defeat opponents who were the same age-group as me.

Even after I joined the Knight Order, I also somehow managed to win. …However. Right now, I am doing my best just to keep up with the current situation. The opponent still looked calm and composed. I completely cannot envision the path to winning. To be honest, I am surprised by our difference in terms of skills. 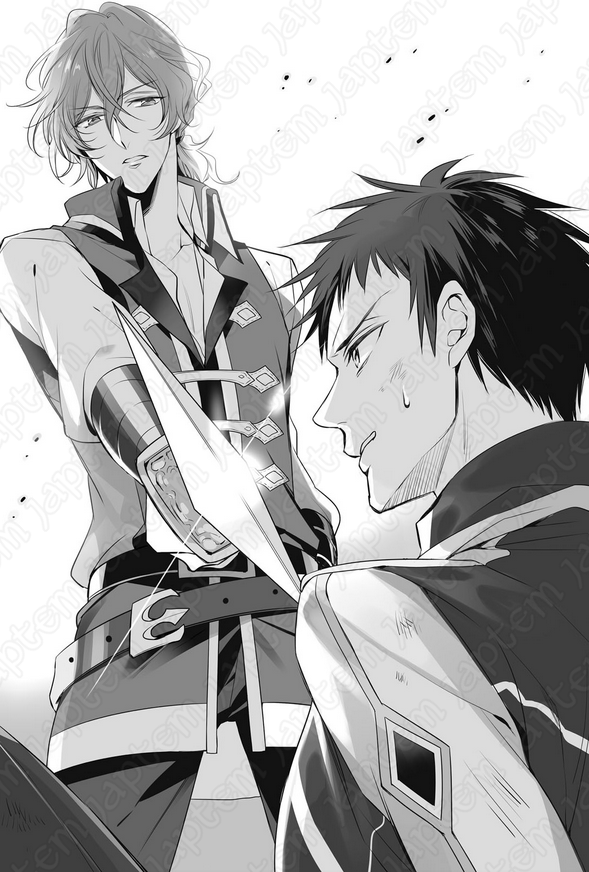 Cla-clang. In the corner of my eyes, I saw a sword twirled in the air. …The match between Dida and the guy from the military seem to have ended. The winner is Dida. At the same time, the power Ryle put into his sword attacks became stronger. As I thought, he as been holding back earlier. Just like that, I was overwhelmed by his attack, and my sword also twirled in the air.

I lost… Although I tried to say that I surrender, but before I had the chance, I saw Ryle rushing towards me with his sword without any signs of stopping.

Normally, when your opponent has been disarmed, the other person will stop attacking! But before I could say anything in retort, I gave it my all to avoid his attack. Even though his attacks were already heavy, what’s up with this speed…

“Halt your attack! The match has ended.”

After hearing the referee’s words, Ryle stopped his sword attack. His sword was only inches away from my throat when the referee called for a halt; I was saved…

With a dissatisfied expression, Ryle slowly lowered his sword. Finally, I released the breath I didn’t know I was holding.

“…You two, why are you two not part of the Knight Order or the Military?”

I was relieved that I didn’t have to face that last attack. On the other hand, I asked them something I was highly interested in. Because if it was them, they would be welcomed by either side. Nevertheless, I have never heard of their names before.

“Because we have a master whom we must serve.”

“But… with the strength you possess…”

“There are no ‘buts’ about it. I have never thought of wanting to serve the country. As long as I am able to protect the princess, it’s more than enough.”

“…Dida. You don’t need to say anything to this guy… And also, it is not necessary for you to say it in this place.”

Hearing Dida’s response, Ryle placed a hand on his temple and sighed.

“But Ryle. Don’t you feel the same way? What did the Kingdom ever do for us? It was the princess who assisted us.”

“And for that reason, whether it’s the Knight Order or the Military, we have no intention of joining them.”

After the two people said that, they walked away from the arena. In exchange, General Gazelle stood in the arena and faced both the Knight Order and the Military.

“Gentlemen, you all have worked hard! Let us all set conflicts aside, have pleasant conversations, and drink together.”

The surrounding once again turned lively, and because I wanted to wash up the sweat I mustered, I headed for the water fountain nearby the training grounds.

“Thanks for the hard work.”

Someone clapped me on the shoulder, and when I turned to look behind, I saw senpai. Because senpai was the one who is closest to me in age, he was the one who often took care of me.

“You were impressive during the match earlier.”

“…Not at all. I did not even come close to consider myself on par with them.”

“Well, that is only natural. If were are talking about the people who can exchange sword blows with the two of them, the people would have to be at General Gazelle and Knight Captain Malcolm’s level.”

Speaking of Captain Malcolm, he is the Knight Order’s ace of all aces. And for them to equally fight against such a person, as expected of General Gazelle’s disciples.

“Really, why won’t those two people willing to stay in the Royal City. Whether if it’s the Knight Order or the Military, I’m sure they will be heartily welcomed.”

“Didn’t the two of them already explained their reason earlier.”

“I felt scared to death for you when you questioned them earlier. Those two people, if you had continued asking them, they would have drawn their swords.”

Thinking that senpai was just joking around, but after looking at his expression, it didn’t seem like it.

“Just like you said, both the Knight Order and the Military tried to scout the two of them. However, they had obstinately turned down the offers. Because the scouts were too persistent, it became a duel. Their master was insulted. It seems the words the scout said was offensive. And in the end, the two of them won.”

I was dumbfounded. Certainly, in respect to the Knight’s Code, when their master is insulted, it is deemed acceptable for them to draw their swords. However, I have never personally seen it being carried out. Mad dogs, those words flickered across my mind. Protecting their master at all cost, and wildly pointing their blades at their enemies. And to actually be able to tame such mad dogs, just who in the world is their master…

“…That duel became a classic. It was completely different from how they played around today. If General Gazelle didn’t put a stop to it, lives would have been lost.”

“It was actually horrifying to that extent…”

“Yeah. Not only do they solidly hold onto the foundation of being a Knight, they also adapt well to situations just like people from the military. The speed of the man named Dida is too fast and one will be hard pressed to catch up, while Ryle’s sword blows are too heavy, making it hard to match him. I can never forget that duel even if I wanted to. Now that I think about it, you. You were really lucky that the referee halted the match just before Ryle’s last attack.”

“Because the master of those two is none other than the Duke of Armelia’s daughter, Lady Iris. I sympathized with your misfortune. General Gazelle probably foresaw that results of the mock battle will likely tip the balance between the Knight Order or the Military and called those two so that neither sides will become the winner. In the worse case scenario, it would probably have been the Knight Order and the Military against those two? But… who would have thought that it would turn out to be two wins and two losses, and the last match just happened to be yours. And just as expected, those two appeared. Thinking up to this point, I was seriously worried that they would take actions against you for what happened in the academy.”

The master of those two, was the duke’s daughter, Lady Iris… Facing that reality, I received a shock equivalent to getting hit on the head with a blunt object. I would never have thought that she… she was the one who discovered them, and they would acknowledge her…

“That’s why I said it’s amazing that you came back safe, and ‘you did great.’”

Indeed, I think so as well. I was glad that today was only a ‘mock battle.’ Even more so, I was lucky that Ryle was my opponent. If that was not the case, I have a feeling that I would not be standing here right now… I suddenly felt a chill crawl down my spine.

“What is senpai’s opinion regarding the duke’s daughter, Lady Iris?”

“Don’t seek answers from me. After all, I have never met the lady herself nor have I spoken to her.”

I felt those words stabbing my heart. Before that incident, even though I have seen her around, I have never had a conversation with her.

“However… if you consider the behavior of those two, one would think that she is a big-hearted person.”

Ryle is too compassionate! I’m sure that if it was Dida, the ground would be colored with blood…