This chapter was brought to you by AnmesicCat, Boyce, Hikaru, and Kerepek_man.

Today, I once again went out with grandpa.

Although I said we “went out,” it wasn’t because we needed to buy something or were going to have a picnic.

The purpose of today’s outing was to see how much magic I could use. In other words, it was something like a magic examination. It was the reason why we were not at the usual forest, but in a plain where there were no trees or grasses growing.

Since grandpa had told me about this place, I’ve been using it to practice my magic.

“Hmmm? This place, has it always been this kind of terrain?” Grandpa was muttering about something.

“Maybe you’re mistaken since you haven’t been here for a while? Well, rather than that, let’s get this started quickly.”

For a moment, I had cold sweat and quickly urged grandpa to start.

“That’s right. Well then, let me see how much magic Shin is able to use now.”

And so, the so-called “graduation exam” began.

First, I imagined combustion. I ignited the oxygen around the air and produced a kindling. Furthermore, I gathered the surrounding oxygen and incited the combustion. Then, the resulting flame was fed plenty of oxygen and its temperature rapidly increased.

Then, I produced a couple more of the same kind of flame in the surrounding.

From start to finish, it only took me a moment to produce the flames. Then, I released the flames towards the ground a little further away from us.

After it was released with a muffled sound, it landed on the ground.

Hmm? What are grandpa’s impressions?

Well, it’s fine. Moving on to the next thing.

Next, I once again produced the same kind of flame as I did earlier, but this time, I turned the flame into a long and thin shape, and also added a rotation to it. The image I had was of a bullet.

The launched flame bullet landed at the same place as the previous flame balls, but it had speed incomparable to the flame balls.

Because the factor called “speed” had increased, the bullet not only melted the ground because of the heat it produced, it also carried the momentum of the acceleration and blew away the surroundings.

What? No reaction again?

This time, I wrapped a mixture of oxygen and hydrogen around the similar flames I produced before, making sure they won’t touch each other. Then, this time, I turned towards a place a lot further away and fired the flames.

I caused a tremendous explosion.

Ah, I made a huge crater. Well, it’s no big deal since we chose this plain for such reasons; even if this kind of thing happened, it would be fine.

Hmm? Why isn’t grandpa saying anything to me?

It can’t be helped, I’ll show him another magic…

“Really, I never thought it to be this much… Since you frequently started coming here alone, for you to have grown this much…”

“No complaints, you passed.”

I lift both my arms and made a triumphant pose. Well, the effort I’ve put in order to be acknowledged by grandpa had been worth it.

At the moment, there was not a hindrance when it comes to living here. Since that was the case, I thought it would be okay even if I don’t leave the house. However, grandpa, grandma, and the other adults didn’t allow it.

Because of that reason, when I turn 15, it was decided that I will leave this house in the forest and live elsewhere.

Incidentally, clothes, daily necessities, and etcetera, were brought to us by an uncle who trades among the adults who occasionally comes here. As such, I never had to leave the forest.

Thus, although there are mixed feelings inside of me, and I felt lonely about leaving grandpa, there was also a part of me who was looking forward to leaving this forest and starting a new life.

While still having mixed feelings, I opened a “gate” to return home.

This “gate” magic was one of my original. A magic that creates another dimension where one can store things inside it already exists. Grandpa also uses it, and the one who taught me about it was also grandpa. It seems this magic was a relatively major one.

“Gate,” a type of magic with the ability to interfere with another dimension.

When one imagines as such, the gate can easily be opened.

The reason why I didn’t teleport directly was because to teleport, meant one had to temporarily decompose their body and reconstruct it when they reached their destination. Somehow, when I imagine I might not be able to reconstruct my body properly, I got scared and lost my will to test it out.

And so, I opened the gate and was about to go home when…

“Haa… This magic is so convenient… Since you can use this magic, you can come back at any time, so you don’t need to be so disheartened.

Ah, I see! Because I have this, I can come back at any time!

…Yes… I hadn’t noticed this until now.

Because my main concern had been dispelled, I became considerably relaxed and went back home.

The next day. A party was held to celebrate my 15th birthday. The participants were grandpa, grandma Melinda, Michel-san, Uncle Dis, Chris-neechan, Sieg-niisan, and uncle Tom.

People whose name only showed up once, or were mentioned for the first time were also here, huh.

Uncle Dis is a nice middle-aged uncle who has a head of golden hair, wears a mustache, and has emerald-green eyes. He always wears very fine quality clothing and has a sense of style? Charisma? And somehow has an aura of a capable company president.

He had the appearance of a sociable uncle. He always had difficult conversations with grandpa, and since I wasn’t told of the contents of their discussion, I don’t know what he does for a living.

Chris-neechan is in her early twenties who has a head of red hair and ties into a ponytail, and light-brown eyes. She’s a person who always wears an armor that doesn’t obstruct her movement, and has a firm and slender body.

Because she is a very serious and a stubborn person, I rarely see her laugh. Nevertheless, she is a kind person. It’s regrettable that she’s unsociable… Even though I think she has big eyes and a cute face, she also has various demerits.

Sieg-niisan is a silver-haired good-looking big brother with blue eyes. I think he’s a magic user judging from the easy-to-move clothes and the robe he wears. However, since he’s good-looking and has an easy-going personality, even if it was said that he was living a life as a gigolo, there won’t be anything strange about it.

Sieg-niisan and Chris-neechan were like oil and water… Whenever they meet, it becomes a fight. They were often scolded by grandma Melinda and Michel-san to not fight, in front of me.

Uncle Tom is the previously mentioned Merchant who comes to our house. It seems he’s the representative of a fairly large business, but since he seemed to be in grandpa’s debt, even until now, he still brings goods to our house himself. He’s a plump uncle who has light-brown hair and eyes and has the kind of body that shows the dignity of a Merchant. He is a very kind uncle, and always brings books or something for me.

And so, as grandpa’s visitors, they also came for my birthday celebration.

By the way, since my actual birth date isn’t known, my first birthday was set on the day I was picked up. However, when I was picked up, it seemed that I was roughly one-year-old.

Then, the celebration for my 15th birthday started. The one who started it off was Uncle Dis.

“Well now, for this occasion, the grandson of our very own hero, Master Merlin, has turned 15 and has turned into an adult. To celebrate this, I want to propose a toast. Well everyone, pick up your cups. To the 15-year-old Shin-kun and becoming an adult, cheers!”

“Everyone, thank you very much.”

“To think that the really small baby, Shin, has become an adult, huh…”

For a while, grandpa and grandma continued boasting of their grandson, and I felt extremely embarrassed. Before long, the topic changed to what I will be doing from now on.

“Come to think of it, Shin-kun, what are you going to be doing after this?”

Was what Uncle Dis asked.

“Well… For the time being, I’ll try going to a nearby town.”

Come to think of it, I didn’t think of what I would do after arriving in town.

Suddenly, the place was shrouded in silence.

“What? There has to be something, right? If you go to a town or a city, Shin-kun, you could probably work as a Demon Hunter, or you could also set up your own Magic Tool Shop with your Enchanting magic, and there’s also an option of meeting a beautiful girl, get close to her, and let her support you.”

“Only you would come up with an idea such as that.”

“A Hunter? Is it that easy to set up my own magic tool shop?”

What? I can receive payment for subjugating a demon? Although I understand what a magic tool shop is, I probably can’t set up a shop immediately, right? 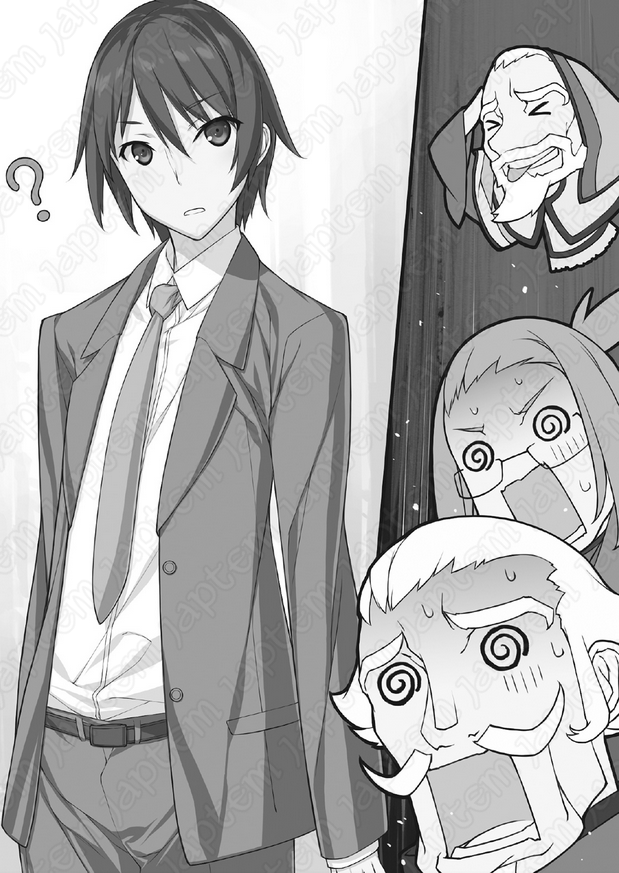 “Although it’s an impossible thought… Shin-san, don’t tell me you have never gone shopping until now?”

“Ah, come to think of it, apart from getting things from Uncle Tom, I have never gone shopping before. Also, because I have grandpa, I’ve never had to exchange anything for money.”

When I answered Uncle Tom questions, the room was once again wrapped in silence

“Master Merlin, this is…”

Both grandma Melinda and Michel-san looked at grandpa.

Come to think of it, apart from learning magic, he didn’t teach me anything else.